Rachel Griffiths (Workshop leader and facilitator) is a participatory theatre practitioner specialising in movement and physical theatre. Following a BA in French and Theatre Studies at QMW College, University of London, she trained with Jacques Lecoq in Paris. She recently received an MA in Cross-Sectoral and Community Arts from Goldsmiths College, University of London. Rachel’s work in London includes leading workshops for teachers, students at the National Theatre; directing primary school children at the Unicorn Theatre; leading secondary schools’ workshops on criminal justice issues for Synergy Theatre Project; and delivering theatre-based workshops in the corporate sector.While living in India between 2012 and 2014 she devised a piece of community theatre with pavement-dwelling women on the issue of insufficient sanitation for women and girls. She also led theatre workshops with girls rescued from the sex traffickikng. She assisted the Director of Theatre at the American International School of Chennai. Her practice draws on the methods of Jacques Lecoq and Augusto Boal and she is passionate about using theatre to bring about transformation in people and society.

Romain Malan (Music Director, choir leader and workshop facilitator). Romain trained at the Dieppe and Fecamp Conservatoire and later completed an MA in Participation in Community Arts at Goldsmith University. As well as working both as a freelance classical, pop, rock and world musician, he is in the pop cello sextet Diversion and  In Harmony, Nottingham. He is also a member of the rock band 286. He works extensively with refugees and asylum seekers as well as with people with mental health issues in London, particularly as a Community Music Workshop Leader with
HCCT  and at the Islington Centre for Refugees. He was the musical director of a version of John Lennon’s Happy Christmas The War is Over which was released at Christmas 2015, garnering a lot of media interest and raising money for refugees through downloads.

Grace Willis (Workshop Leader and Facilitator) is an actress, singer and founder of Barefoot Arts Company. With a particular passion for theatre, Grace studied for a BA Honours degree in Performing Arts at London Metropolitan University. After graduating, and based on her finals shows, Grace was signed by Identity Agency Group  in 2009 and has since worked prodigiiouslly with directors who have inspired her, in great venues and theatres including; The National Theatre, Oval House, BAC, Contact Manchester, Bolton Octagon and Kingston Rose. Grace is also a highly musical and instinctive workshop leader who gives delight to all she works with.

Victoria Longdon (Workshop Leader and Facilitator) Tori is a choral conductor, arranger and singer, currently studying for a masters in Choral Conducting at the Royal Academy of Music in London, where she holds the 2015/16 Stanley Vann Fellowship for Choral Conducting. Tori’s professional ensemble, the Templar Scholars, has performed at top London venues including Southwark Cathedral, St. Martin In The Fields and St. John’s Smith Square. They recently appeared on BBC1 and Radio 5Live and in October they gave a special Royal Command performance for the Duke and Duchess of Cambridge as part of the state visit of the president of China. Outside her regular weekly commitments, Tori’s engagements include the National Youth Choir of Great Britain and the Ulster Youth Choir. Over the summer she also appeared as a panellist on Gareth Malone’s BBC2 show ‘The Naked Choir’; sifting through hopeful acapella groups in an attempt to find the country’s most entertaining acapella talent. The show drew an impressive audience share and has been commissioned for a second series. Tori works internationally with singers of all ages, recently traveling to Poland to teach voice to the sopranos of the National Youth Choir of Poland, as well as to Sweden, Malta, America, Germany, and to Shanghai with the Eton Choral Courses. 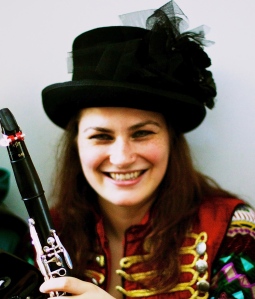 Isabella Fletcher. (Workshop Leader and Facilitator) Trained at the Guildhall School of Music and Drama, the Academy of Performing Arts in Prague and Trinity College of Music, Isabella currently works as a freelance musician, teacher and workshop leader in London.  She has delivered instrumental, vocal and composition workshops with participants of all ages, for organisations such as Brent Music Service and the Guildhall CONNECT programme. She has also set up and managed a variety of collaborations and projects including arranging a series of concerts and performances in IDP camps in Georgia in association with the British Council and the EUMM and work with the charity Bridges Across Borders, which works with communities in the former Yugoslavia. She is the clarinetist and bandleader of the Trans-Siberian March Band. 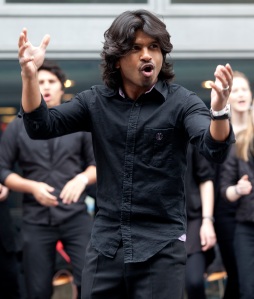 Naveen Arles (Workshop Leader and Facilitator) Studied piano under Richard Beauchamp and Murray McLachlan at St Mary’s Music School and is a pianist, piano teacher, MD, choirmaster and performer. He currently teaches at and runs three community choirs for the Mary Ward Centre  and also runs the London Youth Gospel Choir. His work with these have led to a second year of sponsorship by VoiceLab.  He has worked in India with the United Theological College & Naga Choirs and the St Joseph’s College Choir, Bangalore, which he lead to a Silver Medal in the Bangalore ICC competition. His choirs have performed at The Royal Festival Hall, The Barbican, The Royal Albert Hall, St James Piccadilly, Lord’s Cricket Ground, for the BBC’s Last Choir Standing and at the 02 Shepherds Bush Empire.

Stephen Tiller:  (Workshop Leader, performance) After a degree in English at Newcastle University and a number of years teaching at secondary and FE level, Steve trained as an actor at The Royal Academy of Dramatic Art and, after graduation, worked for 15 years in that field. But he also soon began to direct and produce and write for the theatre, and to use these skills to run workshops employing performance and theatre techniques for empowerment and trust-building with  non-professionals.  Steve has worked for the Probation Service with young offenders, on schools’ and elders’ projects with The National Youth Theatre and Diverse City, with homeless people for Cardboard Citizens, in Belgrade, Lebanon and Palestine with young people in post-war and refugee situations, as well as in the UK and Finland. He has worked extensively with business people, too, in the UK and in the Netherlands, with trainers in Japan, with teachers for the Education Department at the Royal National Theatre and at both BA and MA level at Universities including London Metropolitan, Middlesex, De Montfort, Reading, the Bartlett, Goldsmiths, Rose Bruford and Cambridge University School of Architecture. He is the Artistic Director of OperaMachine.

2 Responses to The Team